Holeee Tripawds! Its bin one heckuva long time but I’m baaaaack! How y’all bin? Me, not so much lately. So … I got this lump on my elbow a couple months ago but it din’t bother me or nuthin’. Maw and Paw finally noticed it and decided it was a lipoma ’cause it was squishy and din’t seem like it was attached. Then about a month later it was much harder so Maw freaked out! We went to my regular vet and they did a fine needle aspirate. Come to find out they thought it might be a soft tissue sarcoma. Whatever that is.

Then, pretty much the day after I went to the vet for my lump, Maw noticed one a my teeth looked like it was going sideways. WTF? Dang! Quicker ‘n you can say ‘get that stick’ they knocked me out and pulled that sucker (the vet, not Maw and Paw) ’cause it was broken! So then we went to UC Davis and talked to the docs there. They were like, we gotta get this lump offa you and then we can decide what to do from there.

So 2 weeks later I was back at Davis and they knocked me out again! Woke up and my elbow hurt and there were all these stitches….Cone time….hated it!

So the last month has pretty much been hell on earth ’cause I HATE going to the vets, it just stresses me out! Waaay too much time there, stooooopid cone, and no walks!

But Maw has been trying to make up for it 🙂 Woohoooooooo! Flying Dutchmans!!!!!!!

And hey, did you know there’s this stretch of I-80 where everything is named after meeee? Woohoo! 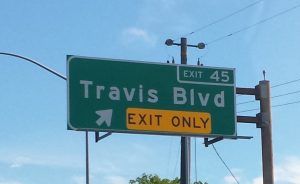 There’s a Travis Boulevard, a Travis credit union, and a Travis AFB, whatever that is.

How cool is that to have your awesomeness recognized by the whole world 🙂 So I guess things ain’t all that bad :).

I am totally healed up, feeling grrrrrreat and ready to rock and roll again! Maw sez she is gonna post more details over in the forums so hop on over there and take a look!

Travis Ray minus one tooth and one lump

3 Replies to “Duuuudes, this is not my beautiful life!”