So Wyatt already scooped me but I am finally feeling good enuf to post myself. Feelin’ pretty lucky today, oh YESH, I am! So last Saturday I bloated and my stomach did a 180 twist. Its called gastric dilatation volvulus (GDV). Uh, yeah, whatever that means. All I know is I felt like %#@$. And then I was at the vets and I woke up with about a zillion staples in my belly (more about that later). There’s alot of theories out there about why this kinda thing happens to us dawgs and some of us are genetically predisposed (whatever that means). So I was havin’ a great day–I got to play in the Bay and drink some salt water (even though my mom kept telling me not to). Then I got a frosty cone, which I ate in two big bites. Then I promptly threw up said frosty cone. And then I went home and drank some water and then I threw up again. I was so thirsty after drinking salt water I really wanted some regular water but every time I drank some I threw up again. My mom thinks all that throwing up and retching made me gulp alot of air and that when the bloat started…..thats her theory anyways and she’s sticking to it!

So I bin modeling all the cone o’ shame alternatives my pawrents have around the house. They got just about everything! I freaked out when they put the standard vet issue model on me. HATE that thang! Can’t see and bumpin’ into things all the time. So they took pity on me and we went to the blow up donut and a t-shirt. The donut is grrrreat ’cause it doubles as a pillow! 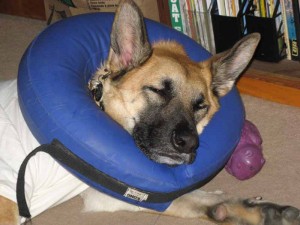 That worked ok but it can’t keep a determined long-nosed GSD like me from messin’ with their back end. Then, just for the heck of it we tried out the bite not collar. But that thang pretty much doesn’t work at all for a long-nosed dawg. 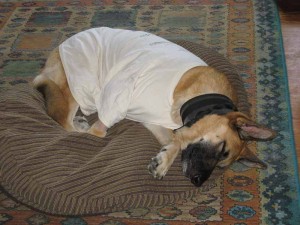 I was pretty good for the first few days, I just kind of licked around my incision ’cause it was kinda raw from where they shaved it. Everything was looking really good other than the bruises and seepage. But my pawrents were havin’ to keep an eye on me pretty much 24/7 to make sure I didn’t mess with it. ‘Scuse the x-rated pic of my peetie! So.Embarrassed! 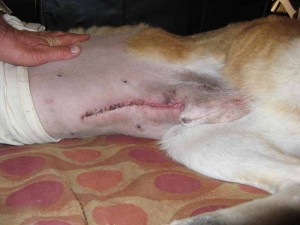 Then, once I lulled them into a false sense of security and they took their eyes off me for awhile…. I decided to go for those staples cause they were driving me nuts! I managed to destaple a couple and my pawrents freaked when they caught me. Off we went back to the vet–DANG! they put even more staples in me than before! And, I have to admit, it freaked me out even more to be back there than it did to wear the cone o’ shame. So when I got home my folks said…Homie–we don’t play that anymore….and slapped one of two new models they had purchased since I went down on my ass (well, on my neck actually). I kinda freaked around a bit but they just ignored me until I decided I wasn’t gonna die from having it on. This morning they put a new one on doubled up with the donut ’cause its a little short. But its clear so I can see and I guess I can live with it…..sigh…. 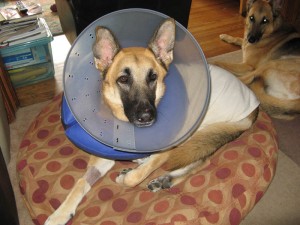 So thats my tale of woe–I am just so hoppy to still be here!

xoxox, I love U guyz,